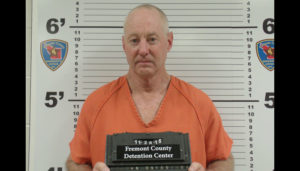 Larson will be booked into the Fremont County Jail in Lander. The 57 days will be broken into two segments. Larson will serve 27 days and at a later date, he will serve the remaining 30.

Larson was also sentenced to two years supervised probation and was ordered to pay court fines and $350 to a victim compensation fund.

On the misdemeanor domestic battery charge, Larson was given a deferred sentence, meaning the charge will be dismissed if he completes the terms of his probation.

Larson admitted that in late November, he “knowingly caused bodily injury to his wife by use of physical force, and doing so he also knowingly restrained his wife so as to interfere substantially with her liberty,” according to court documents.

The charges stem from a night of alcohol use resulting in physical abuse to Larson’s wife and children in a remote cabin in Wyoming.

Court documents show the state of Wyoming dismissed a felonious restraint charge and two misdemeanor domestic battery charges relating to Larson allegedly using the victim’s hair to hit her head against objects and biting her.