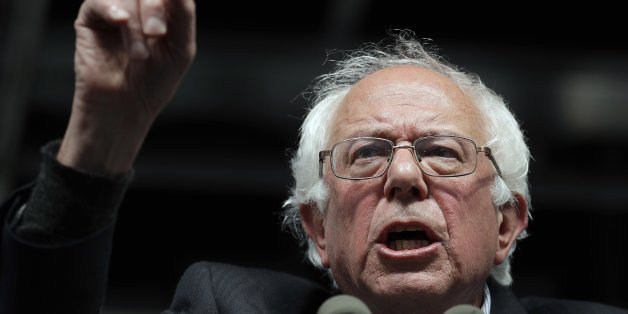 Bernie Sanders had a huge unexpected win in Indiana yesterday. The polls leading up to the primary election showed Hillary Clinton ahead by 6.8 points. Sanders won Indiana with 52.5% of the vote, beating Clinton by a surprising 6.8 point reversal. Did pollsters get it wrong or is there a stronger support for Sanders than pundits have reported? Either way, Sanders win marks another inconvenience for Clinton’s nomination coronation march.

Sander’s major win in Indian did not get the media coverage it deserved. The headlines were dominated by Donald Trump’s victory and Cruz dropping out. The New York Times gave preference to Trump and pushed the story of Sanders win below John Kasich news.

Shortly after the Sanders win, CNN hammered him on his plans to drop out.

Senator Bernie Sanders scored a major victory in his fight against the Clinton political machine Tuesday night in the Indiana primary. Even with that victory the Hillary Clinton friendly media is still calling for Sanders to suspend his campaign and drop out of the race. “Staying in this race, aren’t you effectively making it harder for the Democrats to beat the man who you say would be so bad?” inquired CNN’s Dana Bash to Sanders over the phone.

“Well, you’ve already conceded the race for me and I don’t accept that concession. Thank you Dana, but I don’t quite agree with you. We are in this race to win,” responded the Democratic underdog. Sanders has gotten used to having to fend off the media who favor Clinton over him. Bash commented that it was charming that he wants the remaining states to have a voice but, “tonight we have a new political reality as Jake was just saying, where you have a presumptive Republican nominee and a general election for him is very much beginning.”


The Washington Post published the headline “Bernie Sanders is still winning states – and still losing ground” Another slight against what should have been a celebrated victory.

GQ Magazine published the headline “Bernie Sanders: Why Won’t He Just Give Up Already?” The picture used with the story was a photoshopped version of Bernie as a zombie from The Walking Dead.

The media bias against Sanders has been blatant and brutal. He has faced an uphill battle against a supposedly inevitable candidate and scored multiple wins in significant states.

Supporters of the socialist senator from Vermont found one media ally today. The Huffington Post published the headline, “Hillary Clinton Should Concede to Bernie Sanders Before the FBI Reveals its Findings“. The story claims that Clinton could face Espionage Act indictments and she should step aside for Sanders. This created the trending hashtag on Twitter, #DropOutHillary which gathered over 100,000 tweets.

Clearly Sanders voters are not ready to give up him. Clinton should take notice that the Democratic electorate is fractured. Will she win over his voters in time for the general election fight against the Trump juggernaught? She may not have the right medicine for the Sanders bern victims.